Here are some examples of projects we’ve supported in the past:

Video Archive Including The 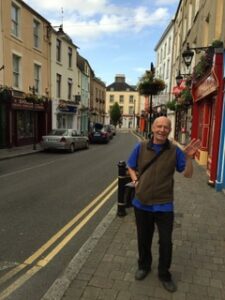 David Reed was an Alexander Technique teacher and filmmaker who died in 2019. He captured on film many key Alexander teachers, events and masterclasses, leaving behind a unique video collection. He left this to Kamal Thapen who has asked the Trust to be its custodian. The Trust is now funding the hosting of the David Reed Media (DRM) collection to make his videos available to as wide an audience as possible free of charge.

In addition to the DRM collection we are hosting the Congress videos. The copyright for these has been kindly passed over to The Trust by Michael Fredericks and the Alexander Technique Congress Association (ATCA). We hope to also show many other videos, some exclusive to this site. We wish to thank participating teachers for permission to include their videos on the site and to invite all those who feel they have benefited from the video archive to make a donation to ensure it’s continued growth and development.

Part-funding for a group of Alexander teachers to set up a clear and accessible website for the general public about the Alexander Technique, with a particular focus on its use in education. The site offers problem-solving strategies for learning, stress, co-ordination and activity for both adults and children.

Using Alexander Technique after having a baby

Part-funding for Alexander teacher Nicola Hanefeld to do a PhD at the University of Hull. Her qualitative research looked at how women use the Alexander Technique as a means of mindful self-care in the months after childbirth.

“How do women use their experiences of learning the Alexander Technique in the early postpartum?” funded in 2017, PhD completed 2021

This research project was jointly funded by the Trust and the STAT Research Group. It conducted a rapid review of published literature on psychological and non-physical outcomes following Alexander Technique lessons.
“How does the Alexander Technique lead to psychological and non-physical outcomes? A realist review” by Debbie Kinsey, Lesley Glover, Franziska Wadephul , European Journal of Integrative Medicine, Volume 46, September 2021, 101371

A 5-minute film on how the Alexander Technique can improve balance, co-ordination and performance at all levels across a range of sporting activities

The making of this video was supported by the Alexander Trust, 2018

A 4-minute film on how the Alexander Technique helps students in performing arts training with vocal co-ordination, movement, stage presence and performance anxiety.

The making of this video was supported by the Alexander Trust,  2016

An 8-minute film on the difference the Alexander Technique makes in education – from primary and secondary schools to colleges and universities.

The making of this video was supported by the Alexander Trust, 2015

Paths to the Alexander Technique

A collection of stories by pupils and teachers of the Alexander Technique on how the Technique has changed their lives.

Copyright of The FM Alexander Trust. Published by HITE 2015.

An introduction to the Alexander Technique DVD

An introduction to the Alexander Technique by Dr. Wilfred Barlow, showing Dr Barlow teaching. It was produced by Linda and Paul McCartney in the early 1980s.

The Trust sponsored the publication of the 18-DVD set of workshops and lectures of the first International Congress of the Alexander Technique in Stony Brook, New York, in 1986.

The Trust partially sponsored the International Congress of the Alexander Technique in Lugano, Switzerland. The Trust also supported the publication of the Congress Papers.

The Papers were published in two volumes by STAT in 2009

Chris Stevens was a teacher of the Technique for over 20 years. He researched various aspects of the human support mechanism and their relation to the Technique. This interview with Stephanie Smith was made shortly before his death and summarises his thinking on the Alexander Technique.

Known as the The Head Leads and the Body Follows this is a professional introductory video, featuring many well-known teachers. 25 mins. DVD. Produced by Rafaele Joudry.

Published by In Such A Way Productions in 1996.

The Trust funded the complete and unabridged recordings of Alexander’s four books. They were read by Marjory Barlow, a niece of F. M. Alexander and produced by Trevor Allan Davies.

Constructive Conscious Control of the Individual was produced on eight cassette tapes and published by STAT Books in 2000. Not currently available.

Often referred to as the Binkley diaries this is the most extensive and vivid record of how F. M. Alexander taught. Goddard Binkley had lessons with Alexander 1951-53 and subsequently trained as a teacher. Available from Mouritz.

A personal diary by Fiona Robb of her twenty-one lessons with Margaret Goldie between 1995 and 1996. Margaret Goldie was an exceptional teacher who was on Alexander’s first teacher training course in 1931-34.

Highlights from workshops, lectures and presentations at the 6th International Congress of the Alexander Technique, 1999 in Freiburg, Germany. 144 mins. DVD.

Produced and published by David Reed Media in 2000.

If you like what the Trust stands for and want to help fund more projects please consider supporting us, thanks.

Our policy is to use the minimal level of cookies possible, however the site includes social media buttons and apps from third parties such as Facebook, Paypal and Youtube which we do not control and these third parties may place cookies on your device. If you wish to continue on the site please press 'Accept' to indicate you have accept these conditions.

This website uses cookies so that we can provide you with the best user experience possible. Cookie information is stored in your browser and performs functions such as recognising you when you return to our website and helping our team to understand which sections of the website you find most interesting and useful.

Strictly Necessary Cookie should be enabled at all times so that we can save your preferences for cookie settings.

If you disable this cookie, we will not be able to save your preferences. This means that every time you visit this website you will need to enable or disable cookies again.